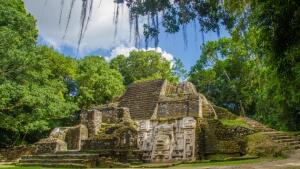 Of Brinton Towers in Braddock Hills, age 82, died on Thursday, November 4, 2021 while a resident of  LGAR in Turtle Creek.

Dick attended Braddock High School and served in the U.S. Army from 1956-1959. Upon returning home, he became affiliated with the dances that were held at the C.I.O. hall in Braddock, learning the disc jockey trade. That experience propelled him to his own show being a disc jockey for a radio station in Cuyahoga Falls, Ohio. Through his connections in Ohio, Dick became the manager of Pine Ridge Lodge, a resort that was located in the mountain forest of Belize in Central America. For 17 years he led tours in Belize through Mayan ruins, caves, forests and waterfalls. He reveled in telling stories about his many adventures in Belize. He told of the ancient Mayan temples with secret chambers and nesting bats, human sacrificial stone slabs, and finding secret burial rooms amidst the ruins with ancient artifacts.

Dick returned home from Belize to care for his mother when she became aged and infirmed and stayed here after she died.

Friends are welcome on Thursday from 11 a.m. to 12 noon at Patrick T. Lanigan Funeral Home and Crematory, Inc., 700 Linden Avenue at Cable Avenue, East Pittsburgh (412-824-8800) where a Memorial Service will be held at 12 noon. Richard will be laid to rest with his mother in Braddock Catholic Cemetery.