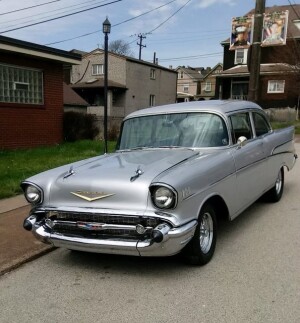 Beloved and proud father of Danielle (Jeff) Zurisko of Monroeville and Alexis (Bob) DelGrosso of Murrysville.

Preceded in death by his parents, Francis and Madeline (Hovan) Baldige.

Dan was a 1962 graduate of Braddock High School.  After graduating, he went on to serve in the U.S. Army during the Vietnam War.  During his time in the service, Dan was stationed in Italy and successfully completed an engineering program.  Dan worked for 20 years at the Homestead Steel Works prior to its closing.  He then went on to form Baldige Construction with his brother WoBo, where the two worked side by side for over 35 years.  Dan loved cars especially his ‘57 Chevy Bel Air.  He was a member of the VFW Post #5008 and the Sokol Hall in North Braddock.  Dan also enjoyed visiting local casinos and taking his Great Danes to dog shows.  He took great pride in his craftsmanship and his love of family, especially being Ta-Ta to his grandchildren, whom he adored.

A Mass of Christian Burial will be held Friday at 10 a.m. in Sacred Heart Church of St. Joseph the Worker Parish.